Continuous delivery features short release cycles, automation, and a direct connection to the source code repository. It's designed to enable teams to get incremental app updates to production quickly and safely. A successful CD process aligns an organization’s technology, processes, people, and culture so that deployment becomes a streamlined, automated activity. Businesses and end users benefit from faster delivery of new features and increased app quality.

The Heroku platform is designed to maximize developer productivity and provide a great developer experience, from an app’s first build to production and beyond. As part of this focus, Heroku extends the platform with a range of tools that support modern development practices, such as continuous delivery. 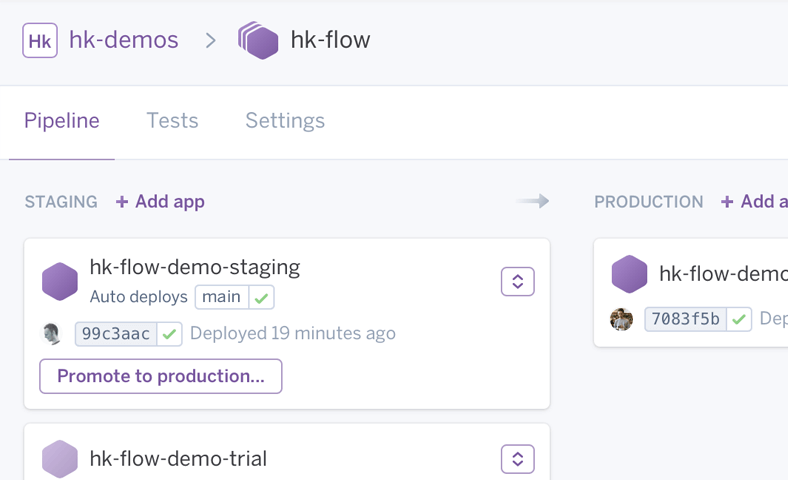 Heroku apps that share the same codebase can be organized into deployment pipelines, easily promoted from one stage to the next, and managed through a visual interface. Heroku Pipelines docs → 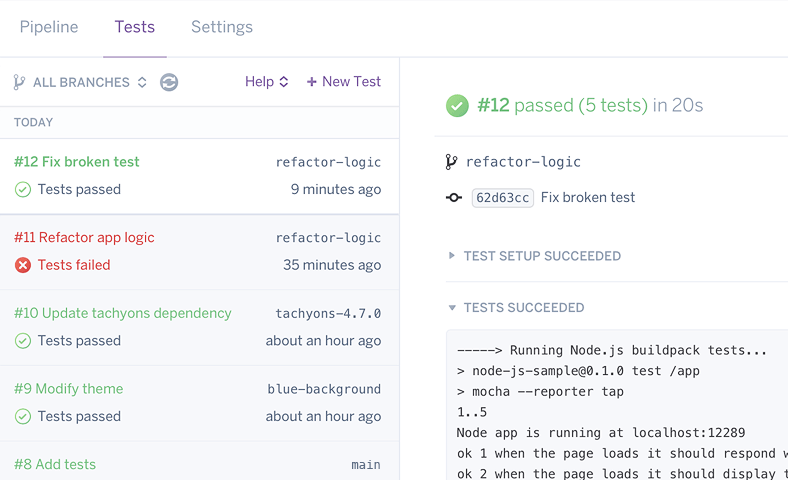 Heroku CI is a low-setup, visual test runner that integrates with Heroku Pipelines to automatically run your tests on every push to GitHub, using disposable apps with strong dev-prod parity. Heroku CI docs → 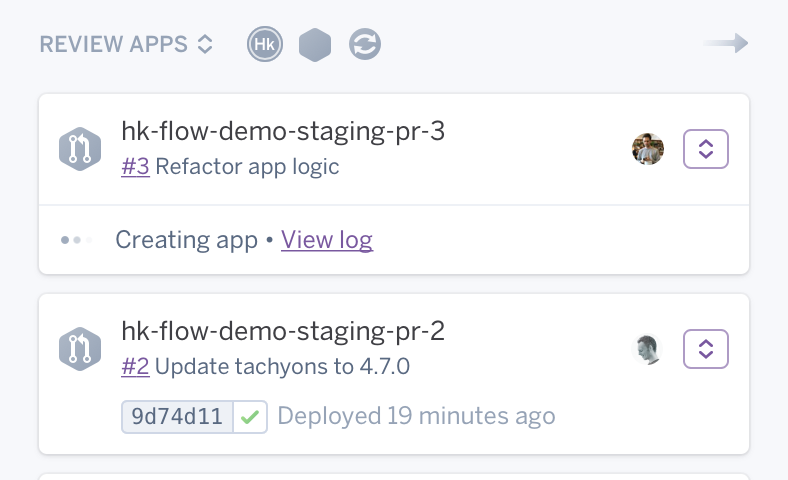 Developers can spin up a temporary test app for teams to review, discuss, and decide whether to merge changes to their code base during development. Heroku Review Apps docs → 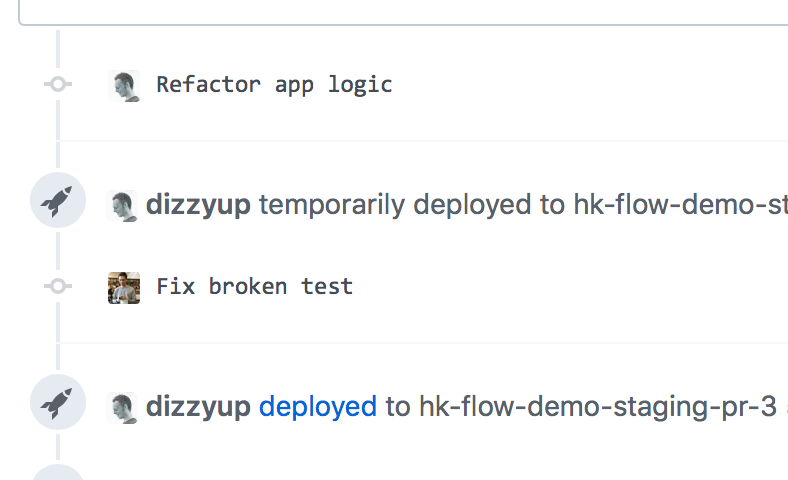 Tight integration between a Heroku app and its GitHub repo enables automatic or manual deployment of merged branches, with notifications in both GitHub and Heroku. GitHub Integration docs → 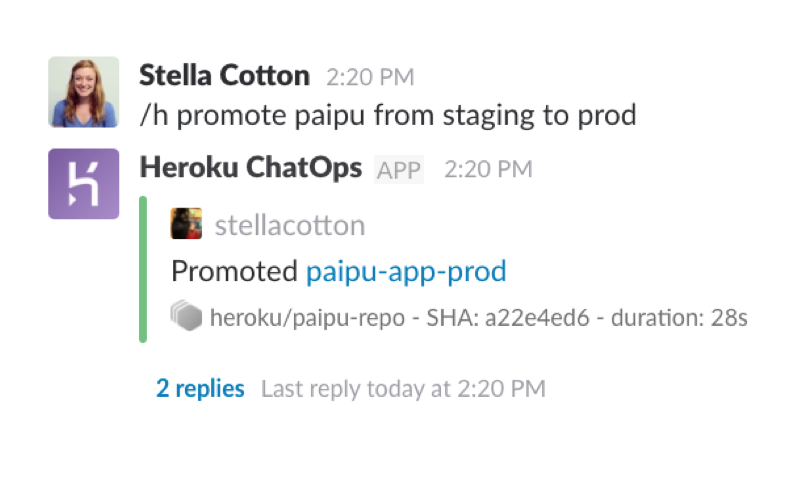 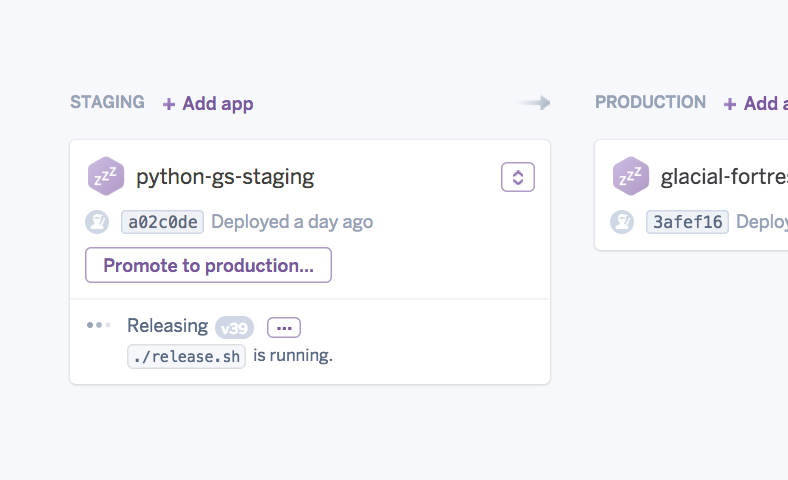 At the heart of continuous delivery lies a basic branch-and-merge workflow. Multiple developers each work on their own code branch, share changes for peer review, feedback and approval, and seamlessly merge their updated code into the main branch. The process is straightforward and efficient, easily keeping pace with the speed of the team.

With continuous delivery, app releases become more like a drumbeat than a big bang. The practice offers a steady stream of benefits to engineering organizations, end users, and business stakeholders—without the disruption of the traditional release process.

Continuous delivery enables a business to stay competitive by delivering new app features and updates into the hands of customers more quickly. Engineering teams can be more responsive to changing business needs and market trends, better manage their backlog of features, and are more able to release app fixes as soon as needed.

Automated processes and environments reduce the time and expense of traditional manual testing. This allows app developers to focus on what they do best: development. Teams work at a faster pace, deliver more value to the business, and collaborate more effectively on solving problems. All members of the project, from design to product to marketing, can see changes sooner and participate in decision making at each step of the process.

Frequent releases allow teams to find and fix issues earlier in the development process, which means that code flaws are much less likely to reach production. The code base stays clean and at a releasable state at all times. And with continuous delivery, repeated testing of deployment processes and scripts also happens earlier, before it gets to production.

A successful continuous delivery practice is founded on three core components that will help teams produce the best results:

When practicing continuous delivery, it’s vital that development teams establish a process and agree upon a common set of tools that ensure consistency across app performance, function, and user experience. Configuration management enables version control of all the parts of the CD process, such as source code, databases, documentation, test and deployment scripts, and app configuration information. Developers can then reproduce an environment when needed, and trace all dependencies used to re-create the environment. Having one source of truth—and a reliable one—provides a stable foundation on which to build a smooth deployment pipeline.

How to manage multiple environments in Heroku →

In complex apps, changes that may seem simple and self-contained can actually produce unintended consequences. Multiple developers may be working in parallel on multiple code branches in isolated environments. When changes are merged to a common main branch, unpredictable results can occur. This often means multiple rounds of regression testing and bug fixes. Continuous integration (CI) is a component of the continuous delivery process that enables developers to integrate their updates into main on a regular basis. With CI, automated tests before and after the merge validate that no bugs have been introduced.

All Heroku Add-ons for CI →

Traditionally, testing has been done manually after code is “dev complete” to ensure that any changes don’t break the app or its systems. However, manual regression testing is time-consuming, costly, and prone to human error. Moreover, QA teams have to spend considerable time and effort keeping test documentation up to date. With continuous delivery, many different tests are run throughout the process. Some are automated, such as unit tests. Others, such as usability/acceptance testing, are still performed manually. The goal is to bring all testing into the CD process from the beginning of the delivery lifecycle, and automate repetitive tasks as much as possible. This allows developers to focus on coding and improving the app.

All Heroku Add-ons for Testing →

For a continuous delivery practice to thrive, everyone involved in an app’s development must share the mindset and habits that contribute to a smooth process. Every member of the team—from product managers to designers to developers—is responsible for the success of their part all the way to production. A few CD best practices will help orient the team right from the beginning.

Take time to define and invest in quality metrics, from unit test coverage, linting, peer reviews of code, and code styling to rules violations and complexity measurements. Create short feedback loops to quickly resolve issues and bugs as they arise. This will help developers produce higher-quality code throughout the process, and fewer issues will be found later on when it’s more difficult and expensive to fix.

A feature is only “done” when it’s made its way to production. This implies ownership of a project right up until it’s in the hands of the user and working properly. Checking the code back to a version control system does not mean it is done! Even if the product is not ready for release, keep the code in a releasable, production-ready state.

The software release process should be repeatable and reliable by investing in automating repeatable tests and tasks. Manual process can hardly be labeled as reliable, no matter how carefully they are set up and done. A build or set of builds with different types of tests that runs multiple times per day, in different environments is an automated workflow that can take many hours to do manually, or even impossible to do without an automated CI process.

Be sure to get continuous feedback and monitor technical metrics, user experience, and all key stages of an application lifecycle, from development to production. This helps improve things at earlier stages of the process, requiring less time, energy, and cost. Smart monitoring and an established continuous improvement process helps teams release in shorter cycles with less risk and better quality.

“It was quick and easy to set up our CI/CD workflow on Heroku. The platform’s tools save us time, and as a startup, we need to optimize for time.”

“Deploying on Heroku is a natural extension of our agile practice. Without the overhead of marshalling traditional infrastructure, we can focus on the frequent and iterative delivery of highly valuable, functional solutions in close partnership with our customers.”

“It took less than five minutes to spin up a new app on Heroku with a new repo on GitHub, and have a sandbox to work with.”